The Sophomores took a quick trip to the Center for Architecture to see the exhibit: Social Housing –New European Projects. “The exhibit revolves around transforming social housing in a way that allows accessibility to new low-cost housing buildings while benefiting the city they’re housed in”, says Mentor Dirm Luawo. The exhibition space featured detailed mockups of the proposed building as well as context around the site. This included how to re-envision current buildings and renovate them in a different manner, providing a more comfortable way of living and updating its aesthetic and usage. 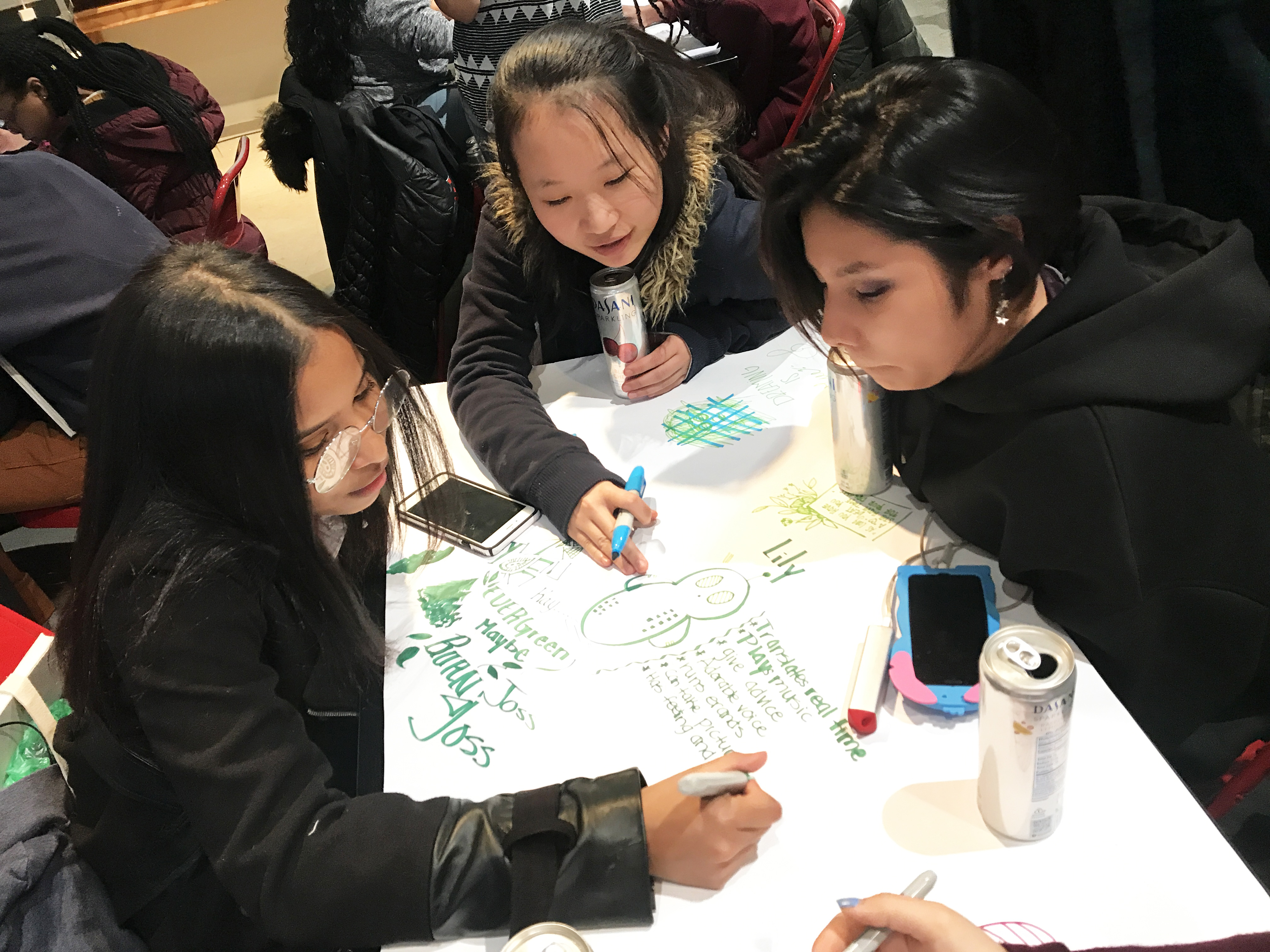 The Juniors took a field trip to Eyebeam, a nonprofit studio for collaborative experiments with technology, to experience the work space of Stephanie Dinkins. There was a crew from A Blade of Grass that stayed along with us to document the whole experience. The Juniors settled in sitting in rows with tables that contained a huge sheet of paper with markers to write/draw with. Stephanie then introduced herself to the juniors and discussed the kind of work she does on the daily. Her work ideally is “A unique culturally attuned AI entity in collaboration with coders, engineers and in close consultation with local communities of color that reflects and is empowered to work toward the goals of its community.” During her presentation she displayed videos of one of the projects she has been working on. The project is called “Conversations with Bina48”. Bina is a human form robot that represents black woman, but was made by white men. Stephanie tries to get information from the robot by asking questions about race, community, politics, etc. This robot even has its own home and everything, “which the juniors thought was crazy”, reports Mentor Ashley Caba. Bina was made to record history through time by having conversations with people. Then the presentation led towards how Google itself or other applications can track you down on a daily basis. This is when the Juniors talked about how they find it creepy that these apps know exactly what you are doing and where you are at the moment. The conversation went on and on about how there is an invasion of privacy going on in today’s world. Stephanie said that her studies and her work all deal with investigating these types of programs. She then was making a comparison between robots and actual apps (like how they act very similar to each other.

Then the very last activity involved the Juniors imagination. They had to draw a robot of their own and say what its purpose is. This activity was exciting to the juniors. They all designed different robots within their groups and got to present them to Stephanie. She was very happy about all the drawings that were made and enjoyed spending time with the scholars. “We never really learn about different perspectives in the coding system but this trip made it very interesting…overall, the juniors learned a lot and left feeling passionate about coding systems”, says Ashley Caba. In preparation for their research of Chinatown, the Senior Scholars learned the 101’s of conducting an interview with Capstone faculty, Joseph Cuillier. From deciding “what to measure” to “who should be asked” and to “identifying your audience”, the Seniors engaged in the best practices for collecting data via interviews and found some inspiration in Here to Stay: Chinatown Art Brigade’s organizing work in NYC and BUFU’s work around Black and Asian solidarity.