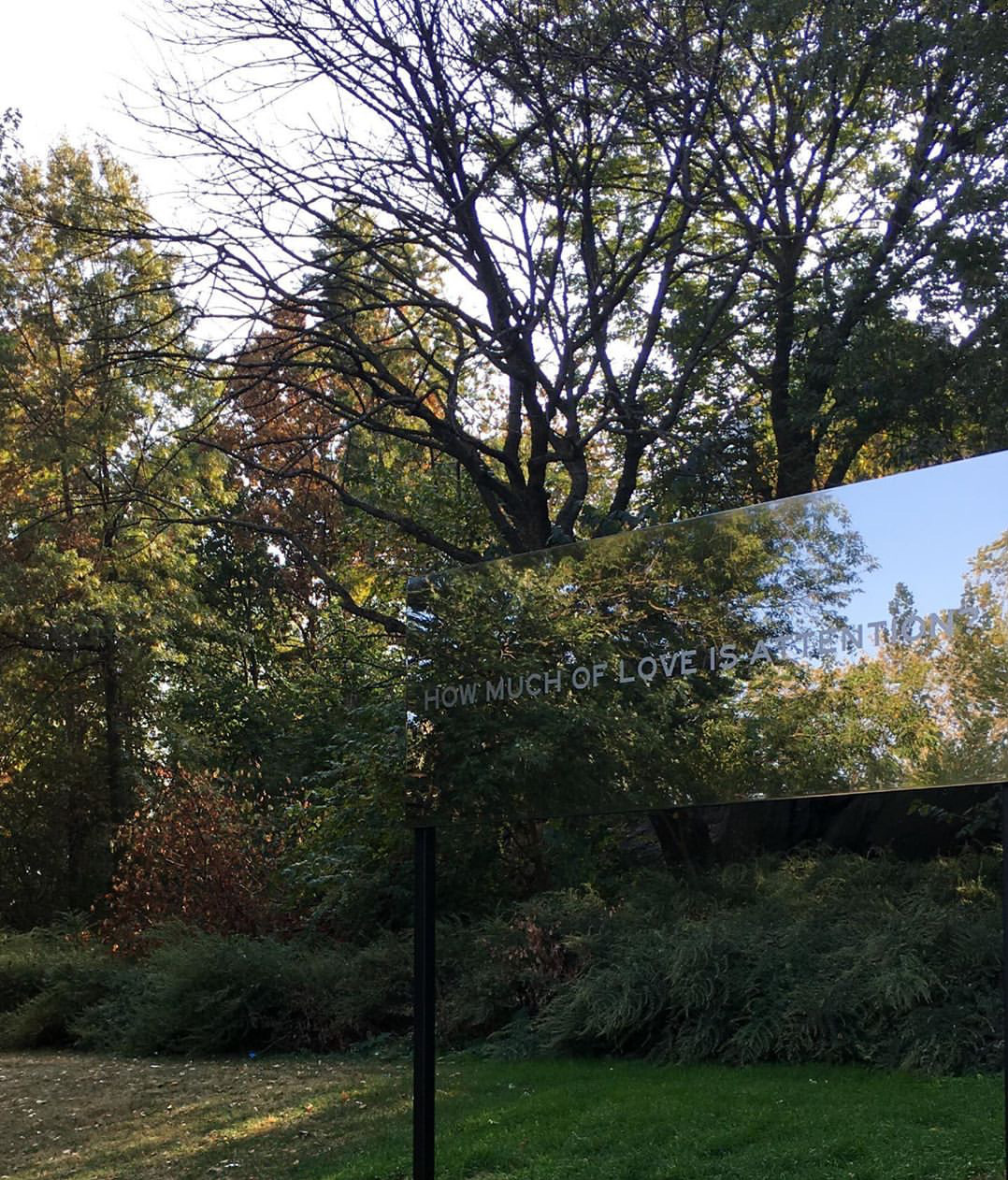 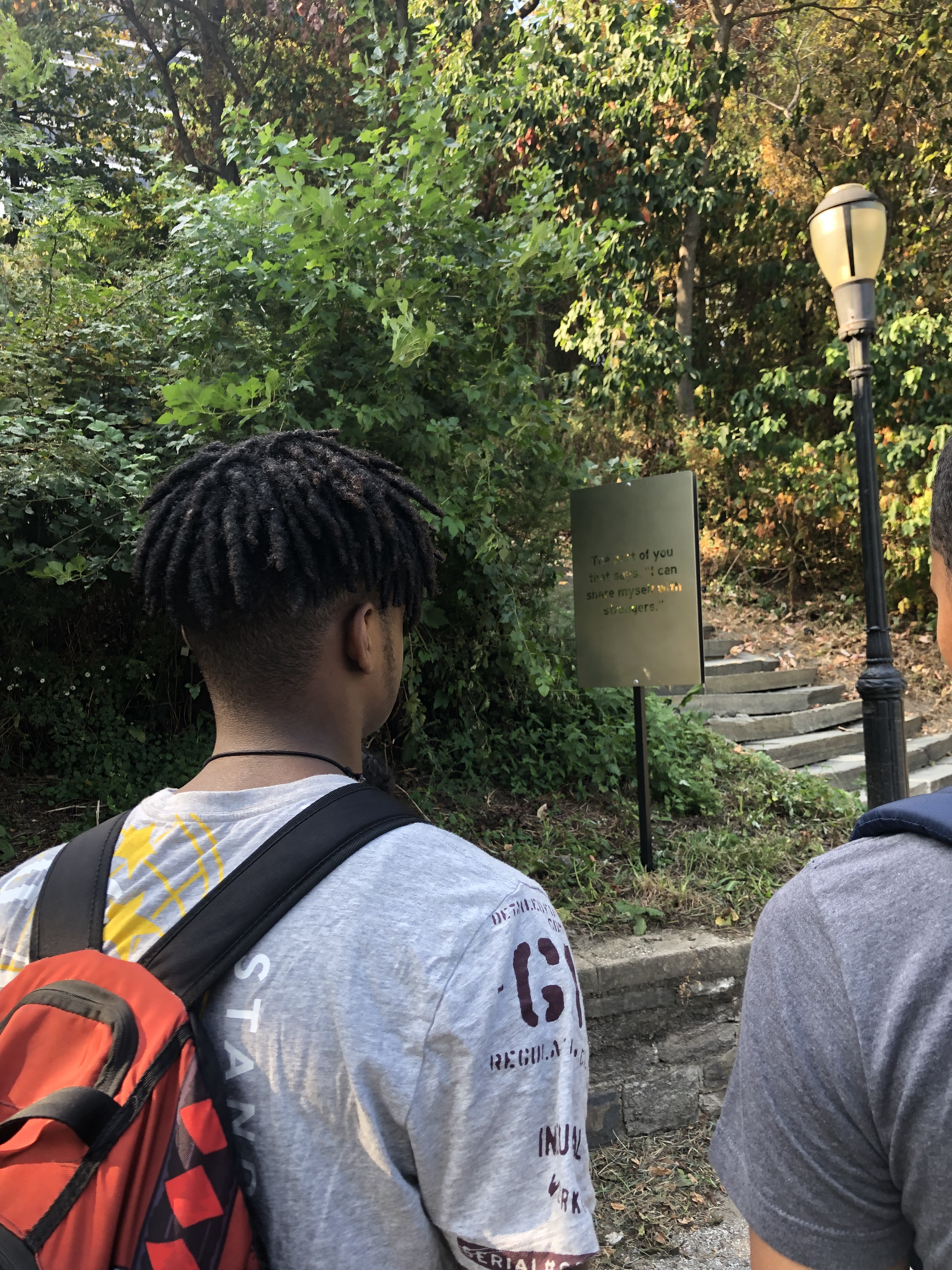 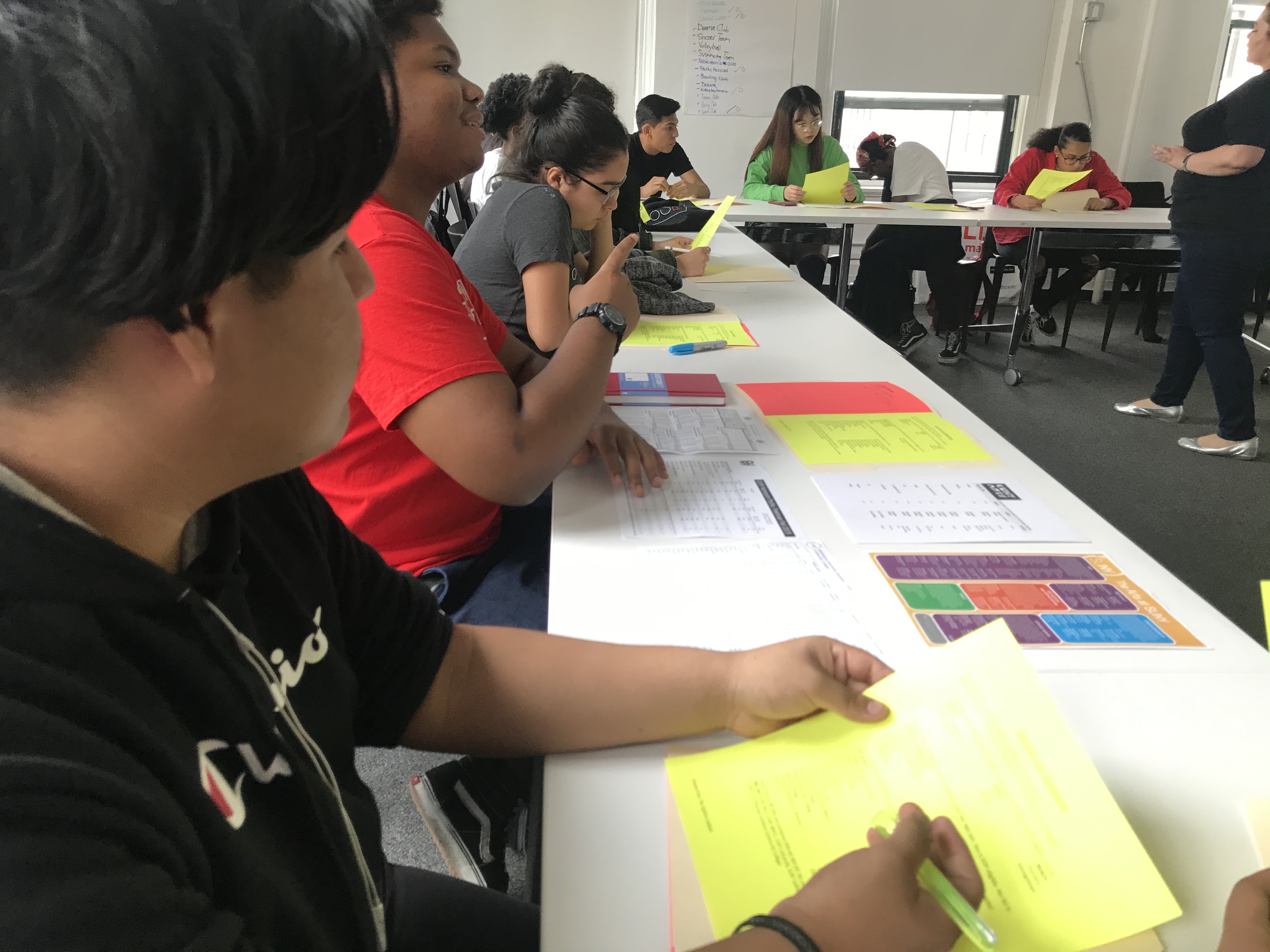 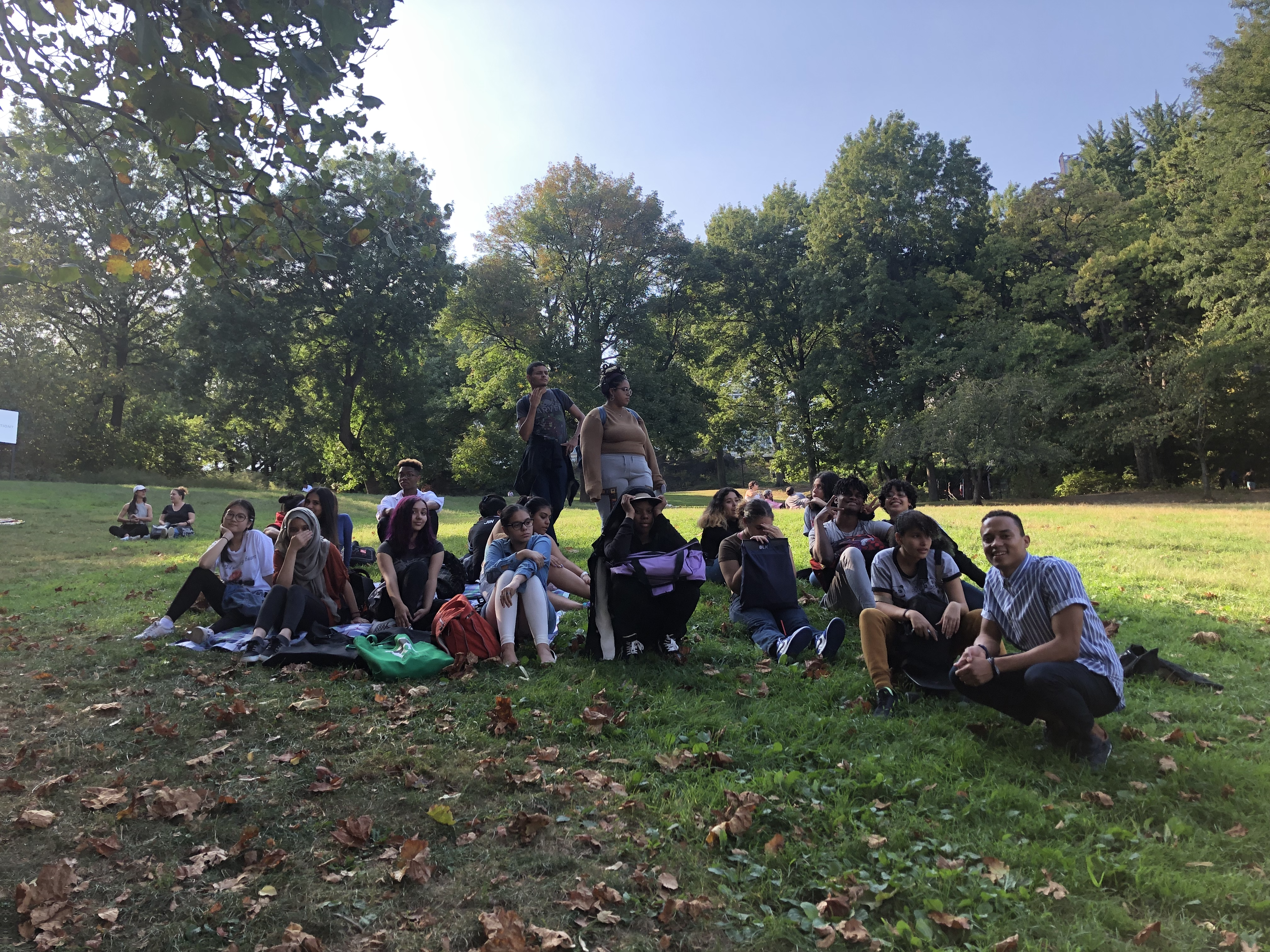 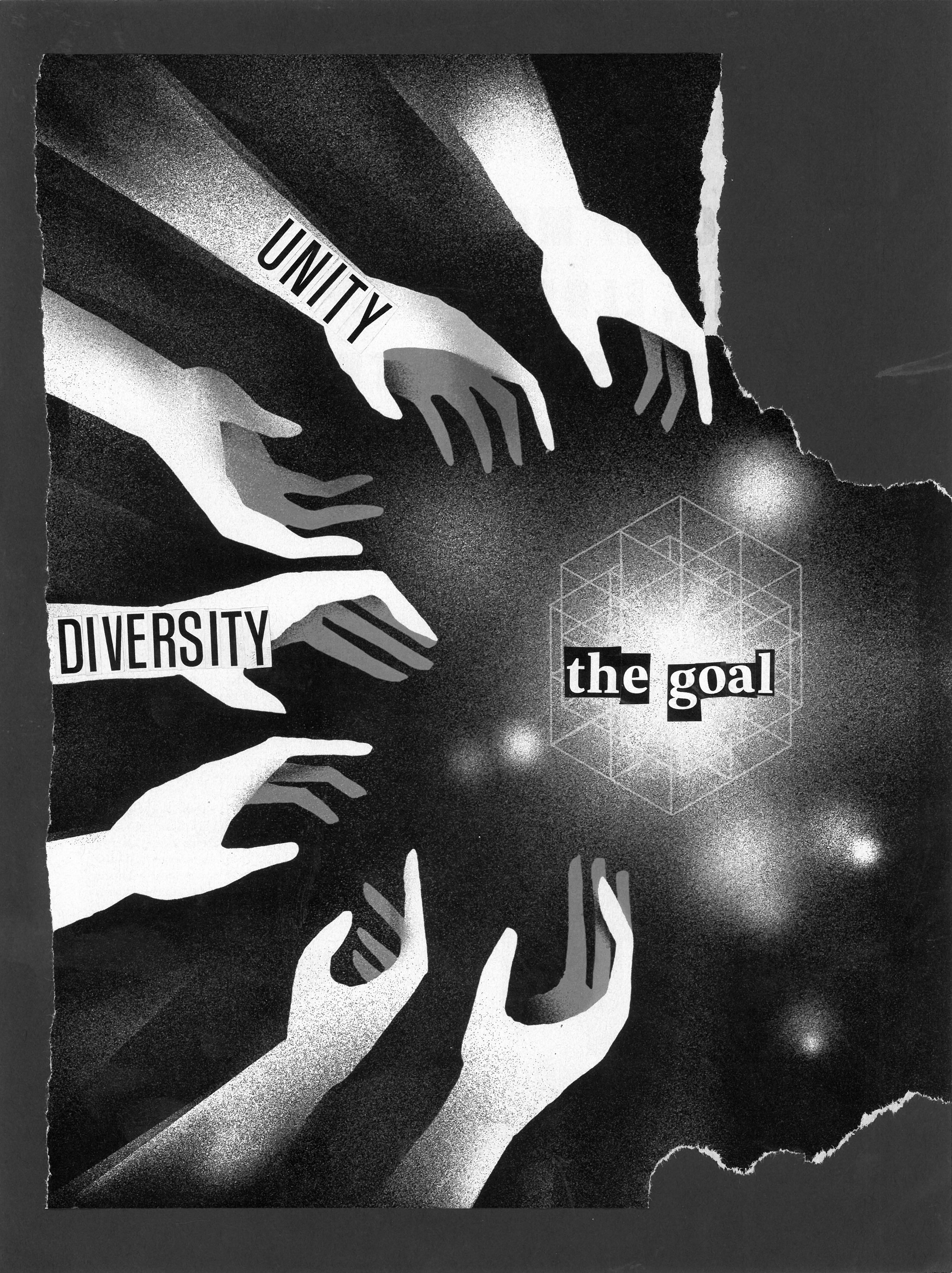 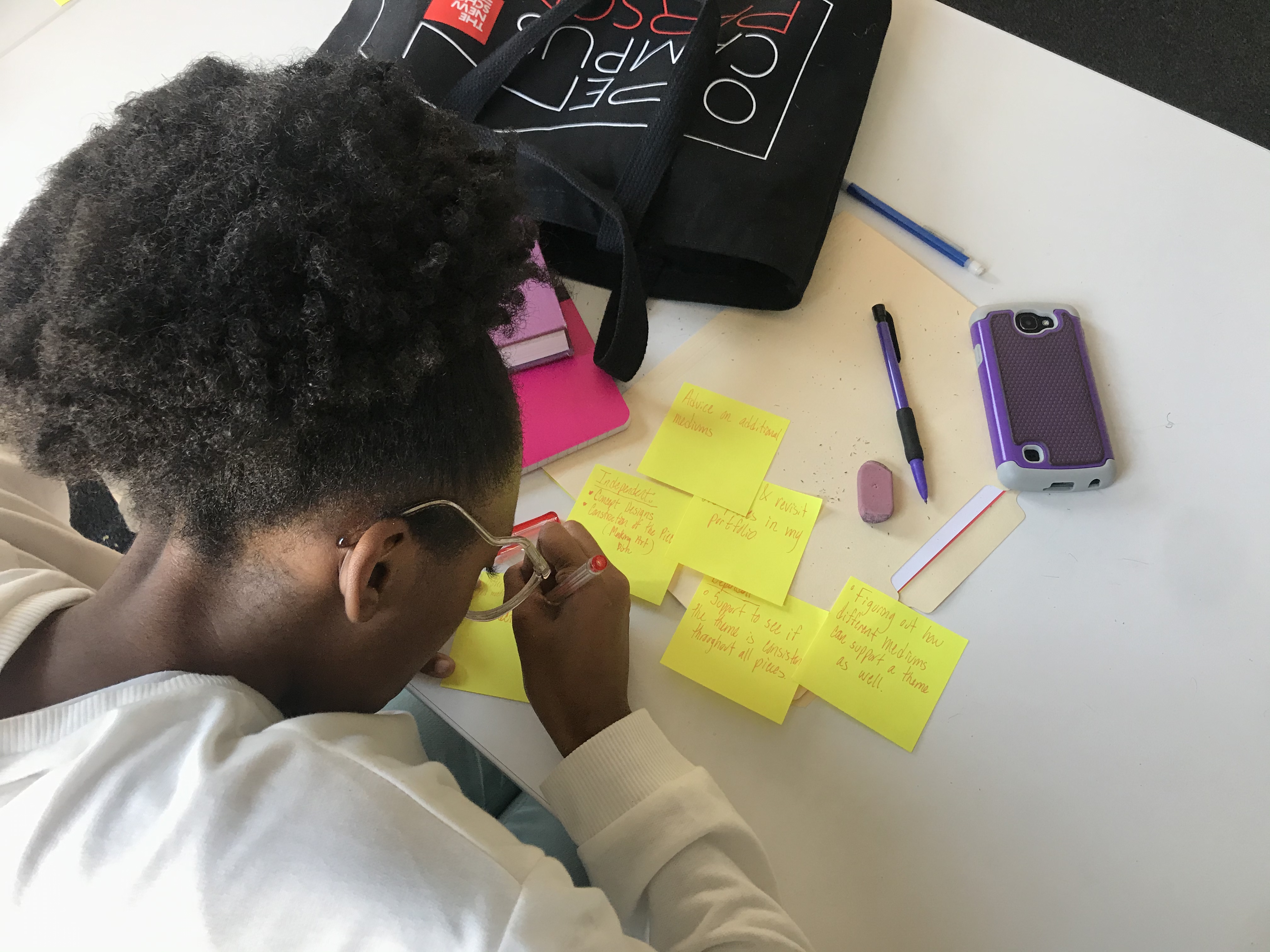 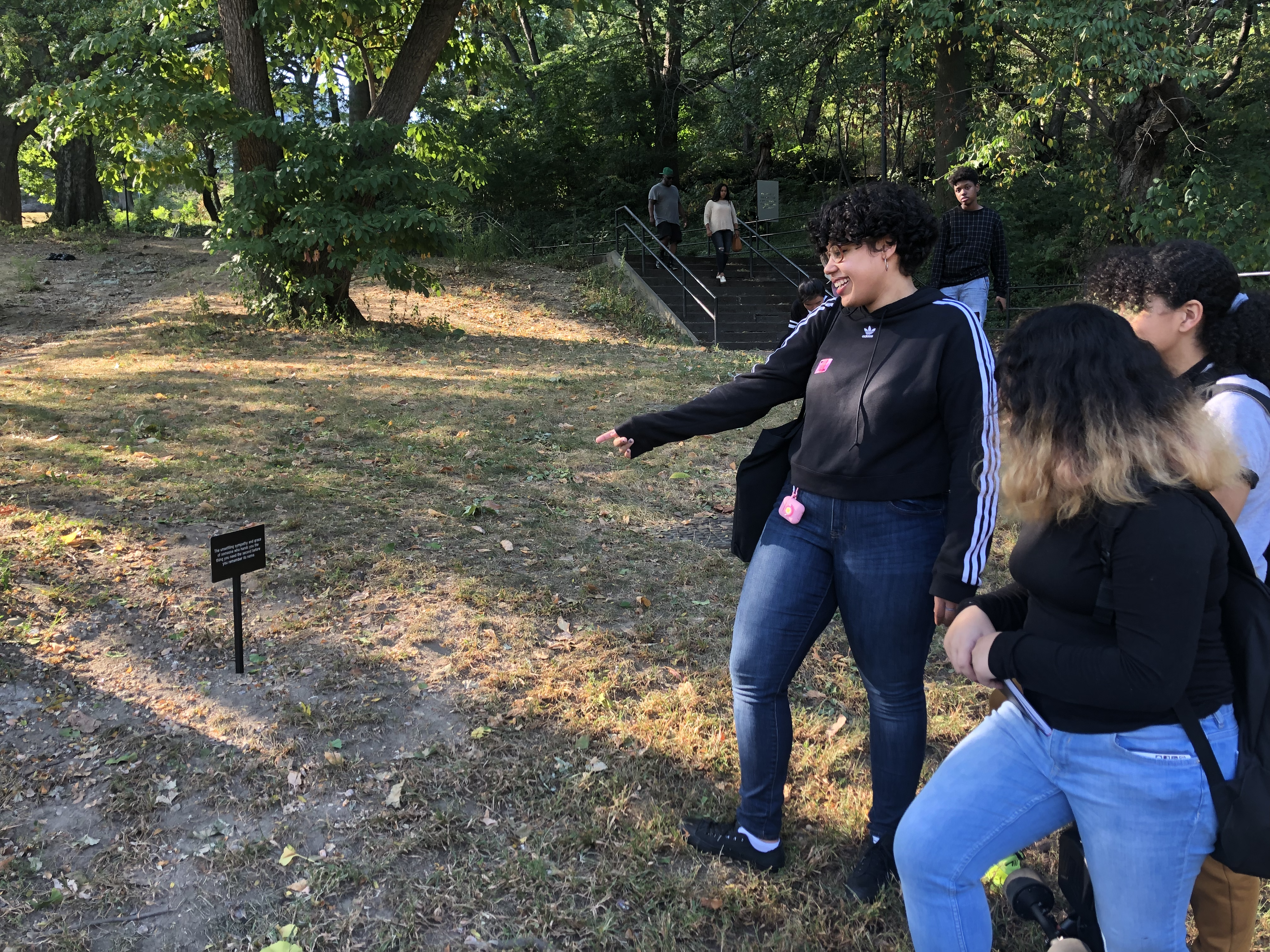 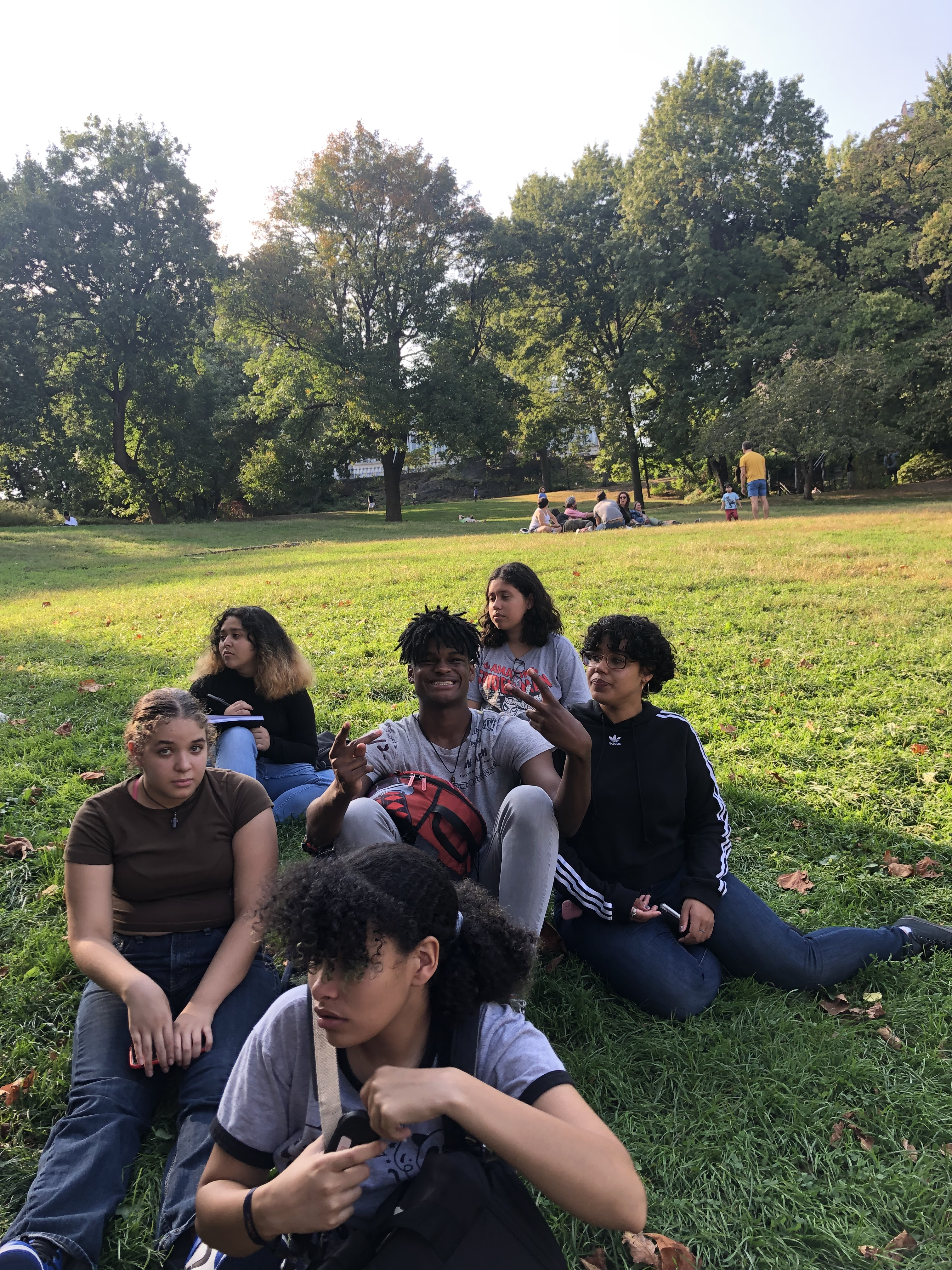 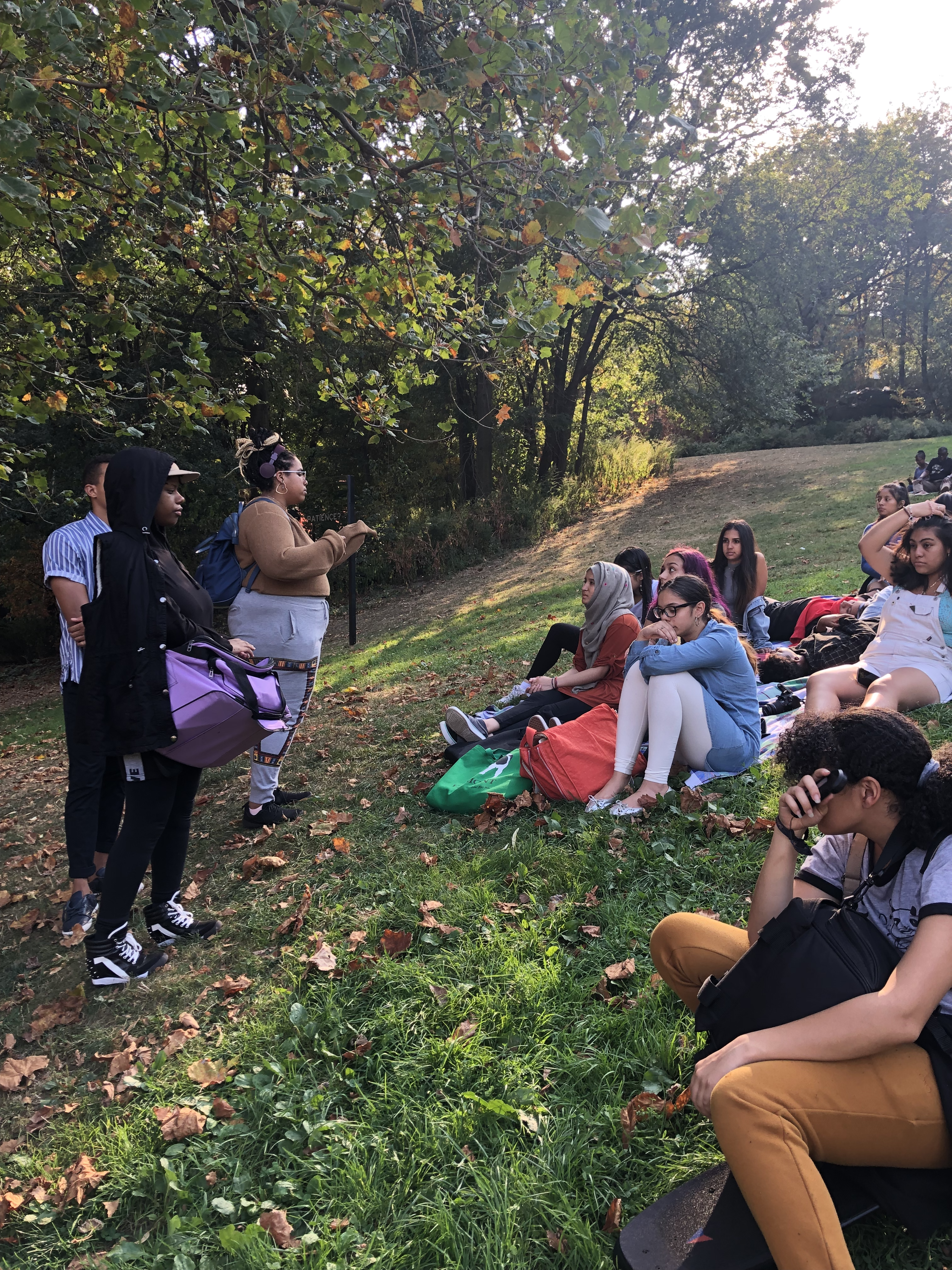 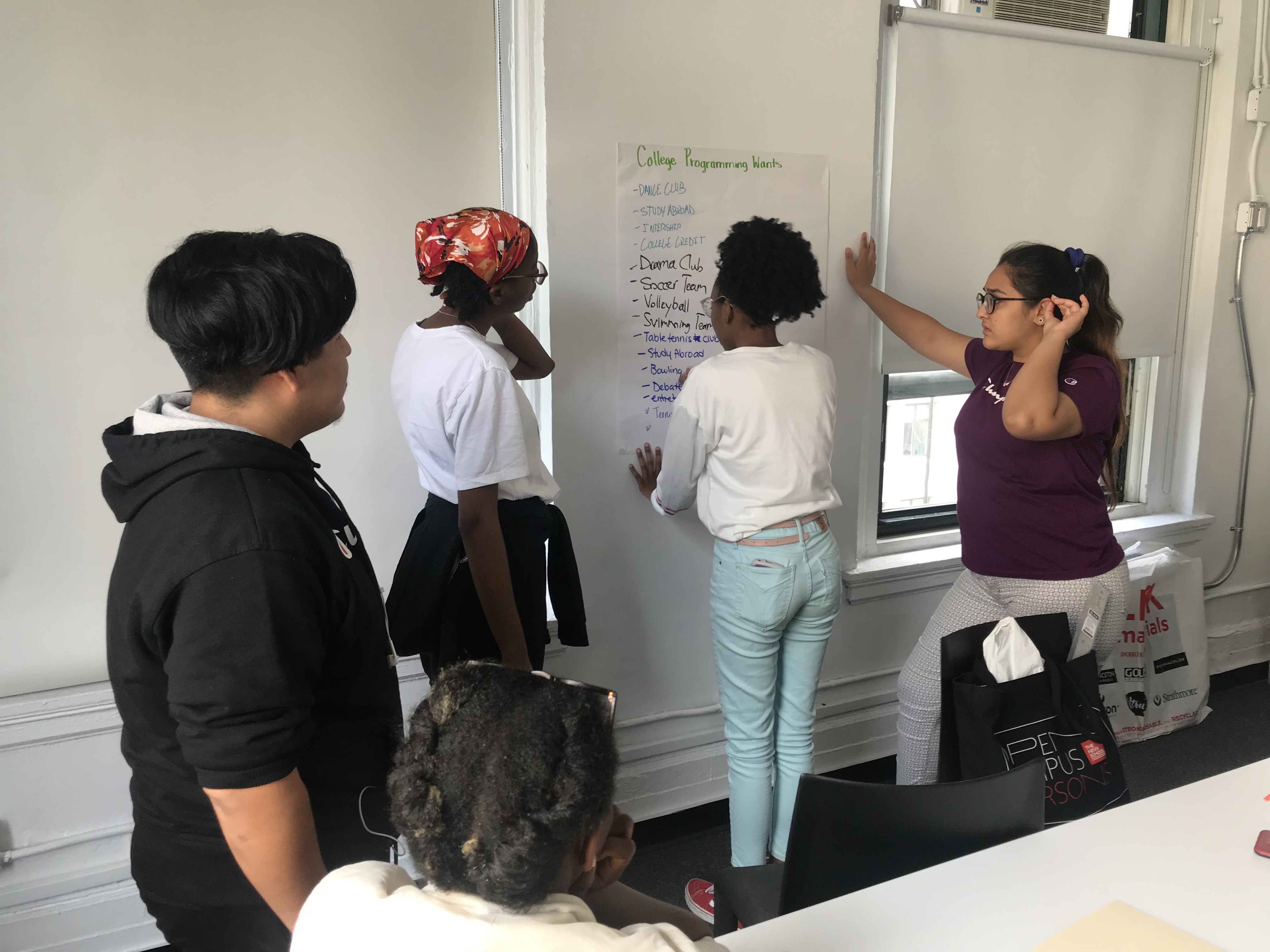 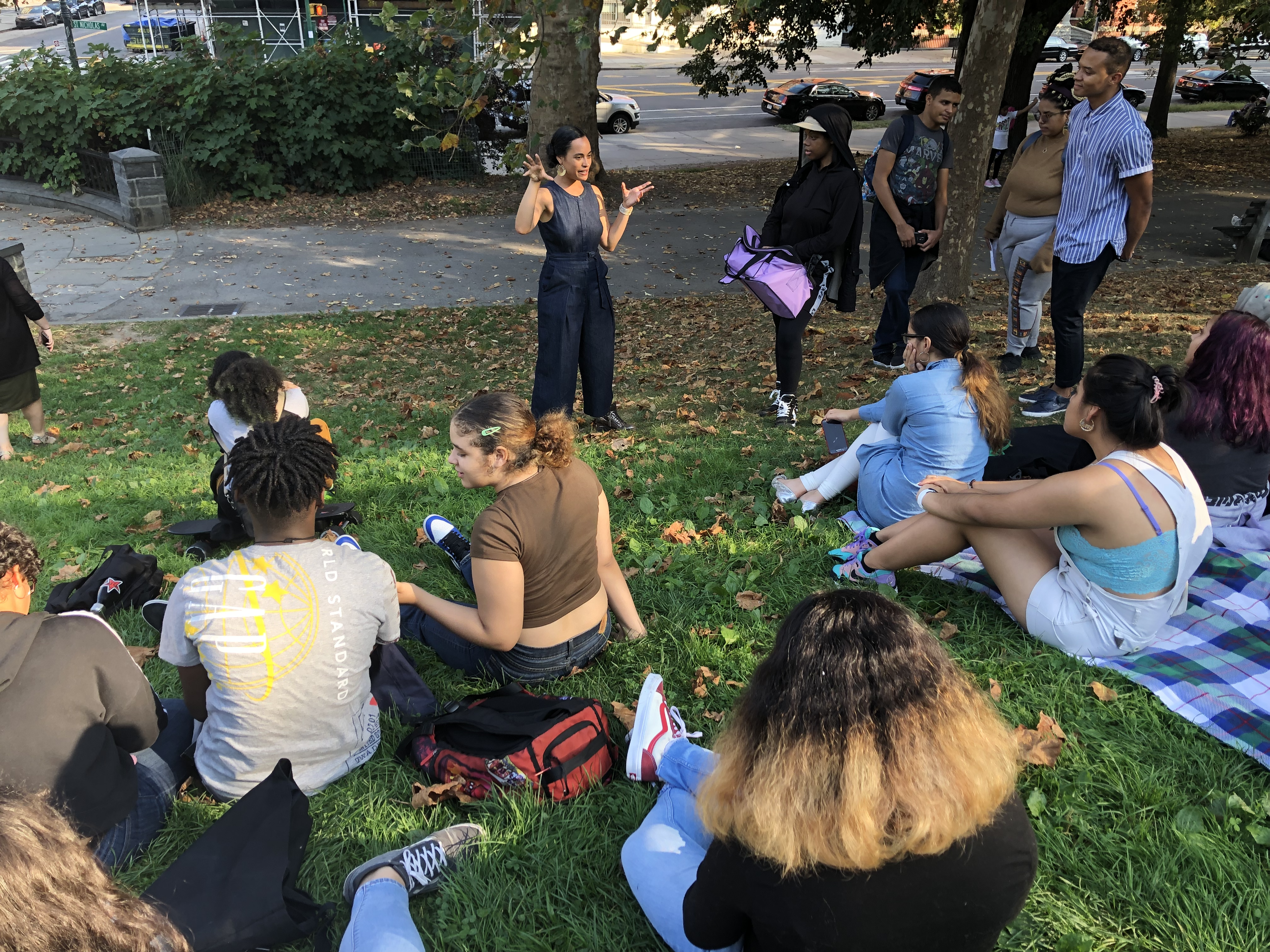 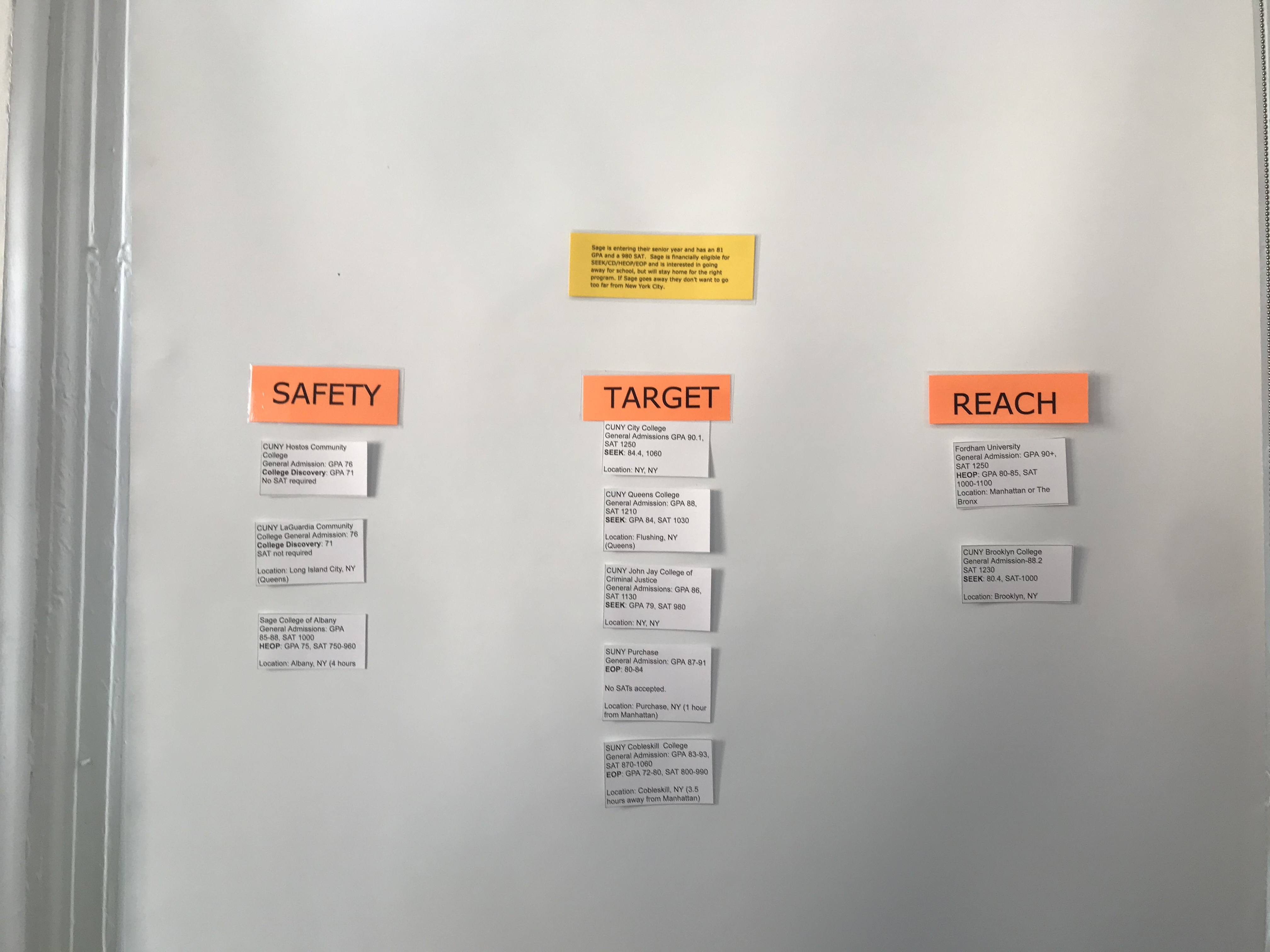 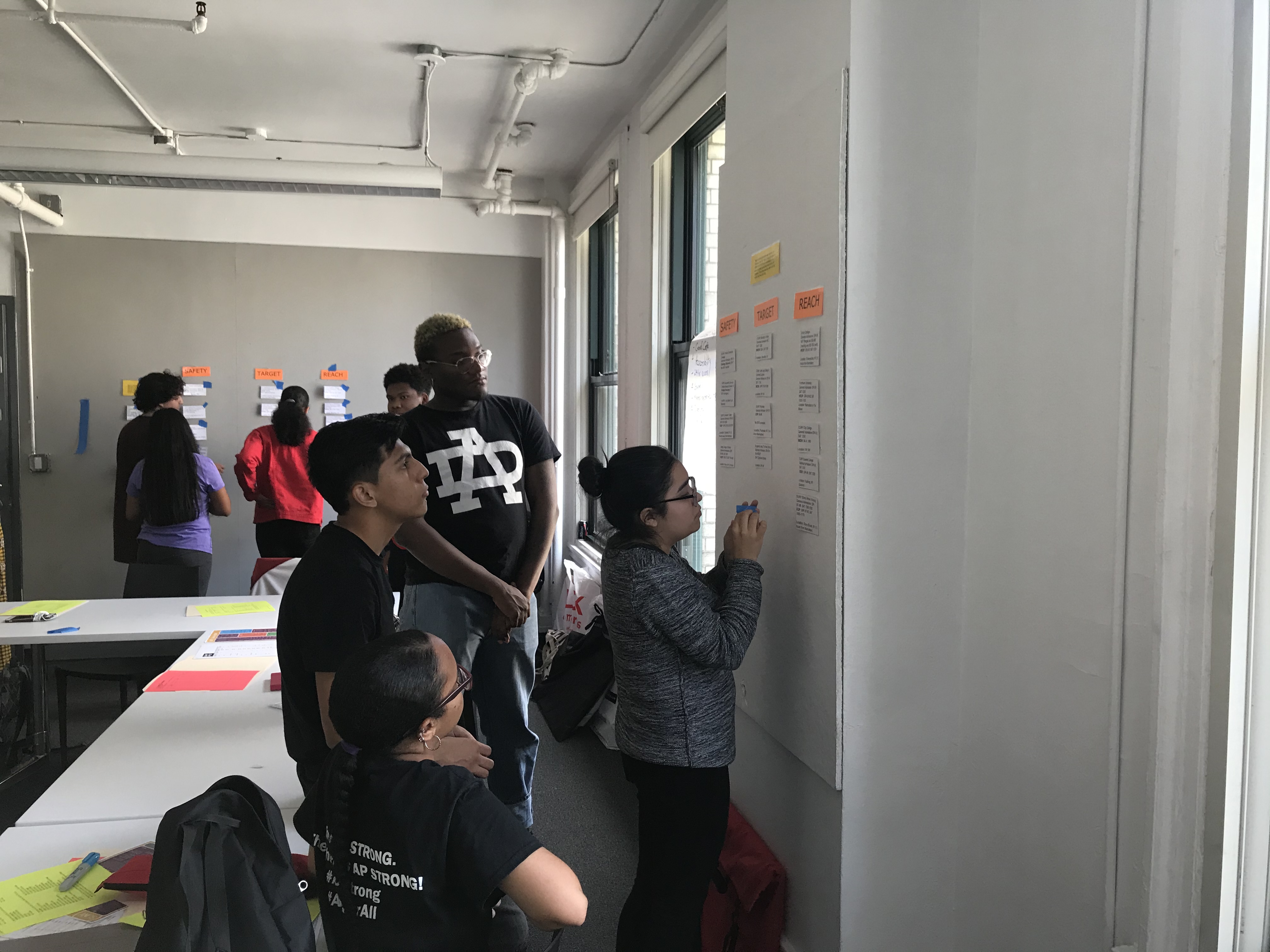 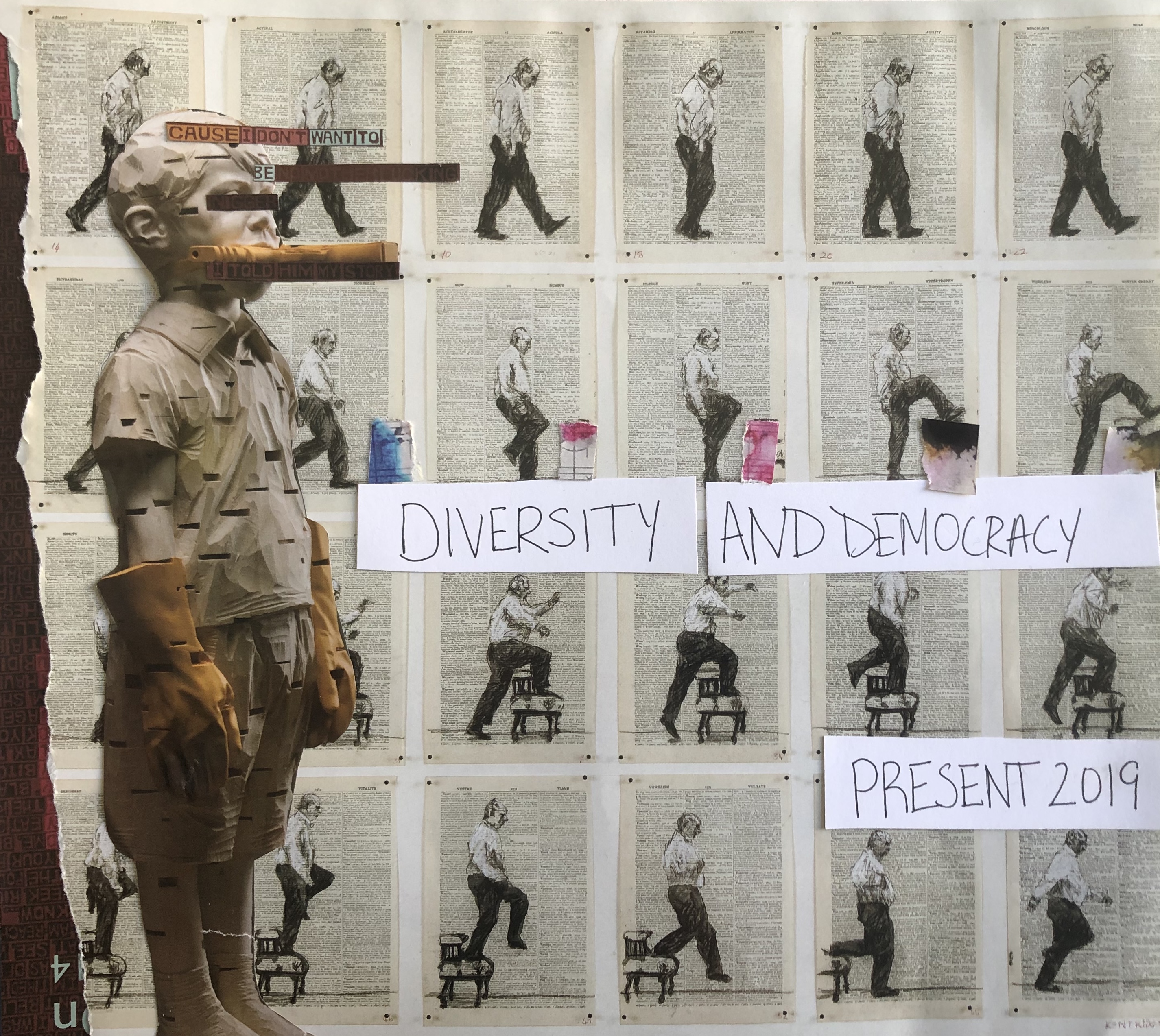 “How Much of Care is Patience?”: Chloё Bass, College Access, & the Controversial Ford Foundation – September 28, 2019

Senior scholars participated in a college workshop led by Juliet, our College Access Coordinator, where she taught the scholars safety, target, and reach schools. Using various sources and scenarios for her activities, scholars were able to get an understanding of how to analyze the college process, understanding the function of GPAs, SAT/ACT scores, opportunity programs, and an activity in which students were able to determine where their college options and choices fell under. Afterwards, the scholars applied what they just learned to create a personal college list made up of schools within the three categories depending on where they currently are academically.

During the morning session, the Junior scholars watched two videos of multiform conceptual artist Chloё Bass  who spoke about her work with The Laundromat Project, her identity, and work as a social practitioner . Scholars also had the opportunity to read through Bass’ artist statement to be exposed to different types of established artists writing about themselves. An excerpt from Bass’s statement, available on her website, is as follows:

“I am a multiform conceptual artist working in performance, situation, conversation, publication, and installation. My work uses daily life as a site of deep research to address scales of intimacy: where patterns hold and break as group sizes expand…My work investigates the potential of the everyday as a catalyst for intimacy. I’m captivated by the common denominators of the human experience: the things that people do always. I highlight the seemingly normal as a means of questioning its stability.”

After lunch, the scholars rode the C train to 135th street to Saint Nicholas Park to see Chloё Bass’ exhibition, Wayfinding, presented by the Studio Museum in Harlem. In small groups of four or five, the students walked the entire exhibition, guided by either a mentor or a youth advocate, stopping at almost all of the individual installations to discuss and interpret the meanings of the respective quotes.

At 4:00, the group joined together to sit on the grass and were met by Chloё Bass herself, who generously answered questions that the scholars had about either her exhibition or her general practice as an artist of color in New York. After meeting with Bass, the scholars were prompted to sketch their reactions to the show or to a specific part of it, discuss, check in, and were dismissed from the park.

This year, Parsons Scholars mentors are participating in a Mentor Fellowship program weekly. These classes are structured around important discussions and activities on issues of access, equity and justice in the Arts industry. Along with this, mentors are introduced to aspects of different processes the Scholars program needs to go through to maintain itself such as applying for funding, grants, etc. This week, the class began with having a discussion around the controversies related to the Ford Foundation.

Mentors discussed the question of how programs like the Scholars program navigate the issues tied to these institutions while seeking and maintaining the necessary aid to continue their work. Through this conversation, a bridge was built into the next activity. The mentors began researching the New School archives to analyze a series of events, movements, activities and exhibitions that have taken place at the New School over its 100 year history. After reading and creating brief summaries on these events, mentors used magazines and digital imagery to create collages that were meant to emulate and/or describe aspects of these events visually.

One collage created by mentor, Emily Xie, addressed  posters called “Diversity and Democracy Now” created by New School students in 1997 to protest for the rights of students of color at the school. The tagline of the post is “There is a crisis at the New School that can’t be ignored. Diversity and democracy now!” Students were demonstrating through a Hunger Strike and occupying New School spaces to bring further attention to the issues at hand. Along with sending a list of demands which concerned more access to support of disadvantaged groups and more financial aid options for students of color and international students. Through her collage, Emily focused on  imagery of the white establishment and using it to bring attention to the insidious bias that exists in large institutions. A critique of both the establishment and those who support without intention of critiquing the way the system is run.

Another collage was created by mentor, Dirmawan Luawo, and his poster addressed his research a poster collection of Third Year Parsons Communication Design students concerning the topic of unity and diversity from 1999. The posters were apart of a competition in which the winner’s poster would be reproduced and used throughout the school. He specifically observed the dated nature of each poster’s use of typography, color and imagery and how it communicated this idea. He took this and created a collage of his interpretation of the competition’s prompt. He cited that rather than Unity and Diversity being what we strive towards, instead these should be seen as part of reaching an ultimate goal.